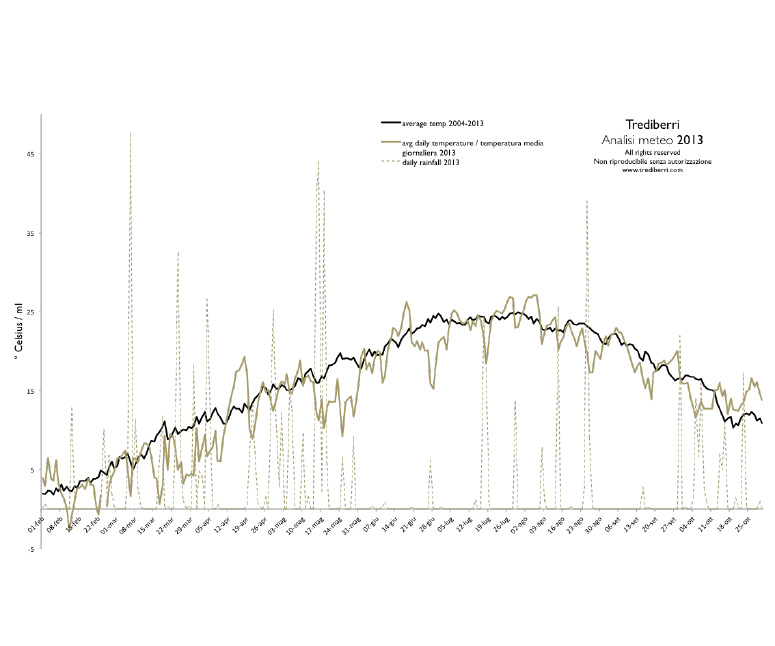 2013 vintage signalled that it was to be an ‘old-style’ late harvest with an unusual and challenging spring.

The unexpectedly large amount of rainfall between March and May made impossible for much of the time to access the vineyards with tractors in order to spray copper. This promoted the spread of infections and mildew. Organic growers (who are not alloweded to use systemic chemicals which have a long life and are not washed away by rain), particularly saw between 25 and 50 % fewer shoots during flowering due to mildew, with a significan loss of the crop.
Summer was cooler than that of previous years and was characterised by a benevolent and notable change in day to night temperatures, which did not however accelerate the late vegetative cycle due to the humid and rainy spring. Producers who were less exposed to infections and mildew carried out a green harvest more or less as normal, whereas the reality for organic producers like us was that the fungal attacks had already significantly reduced crop’s size. In these cases, producers preferred to avoid to further reduce the production and did not carry out the green harvest.
During August and September, the prospects for the harvest started to look very good, notwithstanding that the season was 2 to 3 weeks later than previous years